This article is part of the KF Plasma Times November 2018 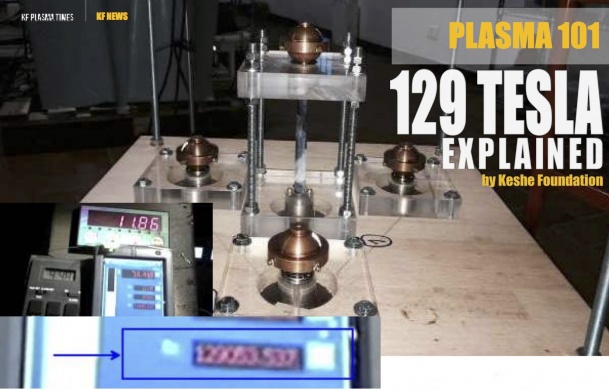 The Keshe Plasma Science and Technology is studying and applying the natural field forces of magnetic and gravitational strengths.

The Tesla (marked with the symbol “T”) is a derived unit of the magnetic field strength in the International System of Units. The unit was set up during the General Conference on Weights and Measures in 1960 and named in the honor of Nikola Tesla.

But together with the Magnetic field strength, we have the reversal of Tesla, researched by Prof. Dr. Ing. Konstantin Meyl and this is the gravitational field. One cannot exist without the other.

We can measure even the strength of our soul in Tesla. If one goes to the depth of understanding to know that there is a magnetic field radius from the soul of the man at a given strength that in respect to the environment where the soul has manifested itself, in his interaction with this environment, one creates the transition of position – the brain of the man. In that process, Man develops his own fields that in interaction with the physicality matter condition of the position it creates the physicality of the body of the man.

Our souls have a Tesla strength. Even the wave at a given strength which becomes emotion, laughter, joy has a strength that can be measured in Tesla.

Through the project funded by the 100 Tesla Multi-Shot Program, a joint initiative of the National Science Foundation and the Department of Energy's Office of Basic Energy Sciences, the scientists in Los Alamos have created in a three-second span on Friday, August 19th, 2011 a 97.4 Tesla magnetic field — the highest non-destructive magnetic field in the world.

When we are in the material state we have complexity. At the time the matter is opened to reach the plasma the way Keshe Foundation researchers did in Desenzano on October 2014, 129 Tesla is nothing.

The 129 Tesla was not achieved over a flip of a finger. It was a live presentation over 3-4 weeks during which it was jumping around 20 - 21 Tesla, then it passed 25 Tesla, then it passed 100 Tesla and it built it up to 129 Tesla. The measurements were done using specifically designed sensors, which were later sent to the laboratories in Switzerland for the manufacturers to test. A full-scale report comes back showing that the sensors are in perfect condition and the 129 Tesla measurements are correct. 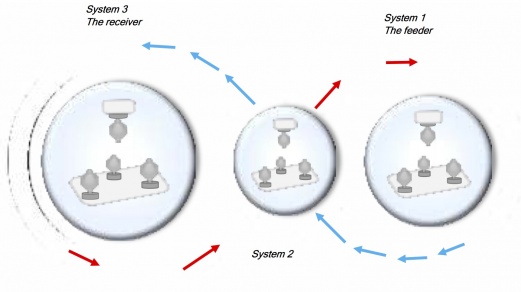 How was the setup done to achieve such results?

System 1 was placed on one side. System 2 was in the middle and the System 3 was covered in another side of the research laboratory. All three systems have star formation configurations.

The plasma from the GANS materials created a field. System 3 was covered by the balanced magnetic field shields which means everything was at the weakest, it absorbed most of it. System 1 is feeding System 3 via System 2, and System 3 is returning to System 1 via System 2, creating an infinite loop plasma field flow. The more System 1 fed, the less System 3 was returning back to it. System 1 was feeding more because System 3, having the blanket with the plasma heartbeat inside was absorbing almost everything, dissipating very little out. This was awareness of existence because the internal field could detect the magnetical of System 3 according to the gravitation of System 1.

System 1 to System 3 was Tesla; System 3 to System 1 was Meyl. The detecting sensors were placed on one side and the other of System 2 to observe the motion of the field. The entire setup used only 4 motors, on a total consumption of 12 Watt just to rotate the star formations and a plasma emission was created as it was needed. System 2 and 3 had partially components from the Iranian reactors and each one had reactors inside.

“It was very interesting when we were running these tests… this (on the ceiling) is part of the… it's in the building and we had fluorescent lights and at nights we used to stand and watch because there were so many fields that the fields of the plasma used to bring the lights on, used to… you know you go to the North Pole to see Aurora we had our own show every night… in the lab.

We used to switch up and wait for it because it cannot come on if there was no field, and after a while when the fields… we switched everything else and the field was there and is… it dies off.

We stand there a few minutes and then that's it, we used to go. It was what we called late night sky show. This is the same principle as Tesla, we know when it shows the fluorescent light in the magnetic field, now we had it… it was beautiful to see it every night before we switch off and if one day it wouldn’t do we’d say ‘…we didn't do good enough, we didn’t create enough plasma.’ ”

The power of plasma was discovered through the new materials – GANS. When replacing the GANS with the neutron plasma anyone can achieve lift in the flight systems.